To request a quotation, please click on the button on the right.

Isophorone Diisocyanate (IPDI) is an organic compound with a chemical structure C12H18N2O2.

It’s a colorless liquid or slightly yellowish, with a pungent odor. It is insoluble in water on contact with which it decomposes, but miscible with many organic solvents (hydrocarbons, esters, ketones, …) 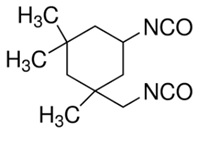 IPDI is also known as:

IPDI is produced in relatively small quantities. With hexamethylene diisocyanate HDI, IPDI accounting only for approximately 5% of the global diisocyanate market.

IPDI is obtained by phosgenation of isophorone diamine during a five steps reaction:

IPDI is  used in the production of special applications, such as:

IPDI is not used in the production of polyurethane foam

Arpadis is one of the largest chemical distributor in Europe.

Blending Repacking Logistical Services Let’s PARTNER with you. Arpadis can offer a number of blending/repacking options across Europe. Centred in Antwerp, well placed as an international chemical trading hub we can dilute, blend, repack and store your chemicals in a safe and professional environment. We are equally adept at both liquids and powders servicing blue […]